Dom Starsia: Why We Play And The Value Of Winning vs. Losing 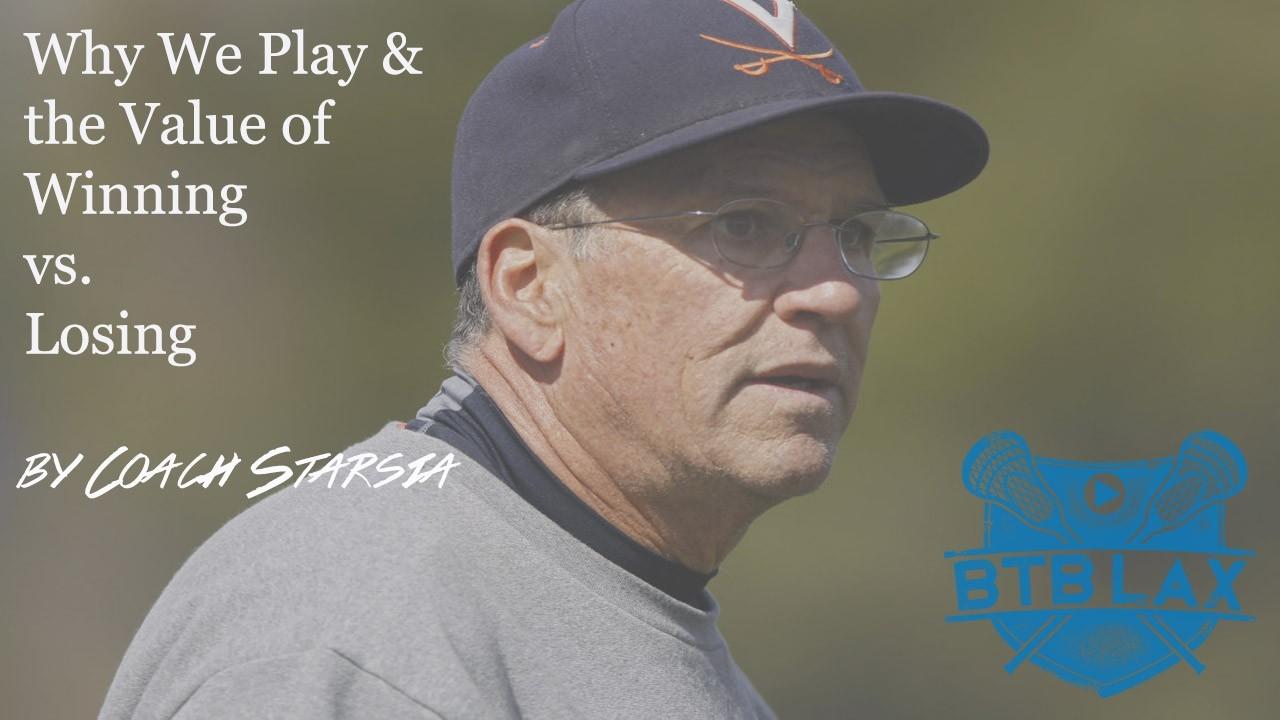 (Coach Starsia is a contributor writer for BTB LAX.)

Between thinking about the agony that accompanied the ending of coach Tony Bennett’s UVA basketball season and spending a day with Mikey Thompson and the Christopher Newport team recently, it brought to mind a theme I have addressed in multiple settings.

If I had to boil down to a sentence what it has been that I have been doing these past 42 years, it would be trying every method to convince young men that “it is worth it” to make the commitment and sacrifices required for success.

There will not be a lot of other occasions in their lives when they can experience the satisfaction that accompanies a group pulling together to reach its potential. I always found hope in a reading from a variation of Philippians 2:2 that “there is no joy the world can give like that which comes from joining good men in common purpose.”

If that rings true, it speaks directly to the question of why we play sports and the value of that participation. The experience begins with roughhousing at home with family and friends. An indelible impression accompanies our first exposure to coaching and influences willingness or aversion to our athletic future. A joyful coach, a respected mentor can have a profound effect on the future of young athletes.

It is also in these very early experiences that we begin to learn to compete. I am not going to apologize for recognizing the value of competition. I realize there is a movement afoot to encourage the mentality that everyone gets a trophy. But ultimately, it misses the point. While there is a physical value to participation in sports and a fellowship and sportsmanship component, there is also a reaction to competition that begins to define one’s personality.

As many times as I had Scott Smith officiating pivotal Virginia lacrosse games during my years in Charlottesville, that is how many times I told Scott that my favorite coaching book was the one authored by his father, Dean, the Hall of Fame basketball coach at UNC.  I may have been trying to get in to Scott’s good graces in every instance, but early in “A Coach’s Life,” his father wrote about “the value in exploring the athletic heart on the championship level.”

What a beautifully simple yet profound explanation for the athletic experience.

There are two important components to consider here. The first involves the actual competition, especially as it applies to players and coaches. When I am teaching stick work to young players, I am always talking about being able to make a play at that moment when the outcome of a game is actually being decided. You can win a wall-ball competition, you can do line drills efficiently, you can play well, you can adjust to the natural ebb and flow of a game for the first three quarters — but do you step into center stage late in a game?

Can you make that same play when you are tired, when you are hurt, when your teammates are looking around, when you can ignore whether or not you will be the hero and simply focus on the task?

This is a very real phenomenon and one that every athlete considers when he steps on the field. What do we find out about ourselves during the actual competition?

The second, possibly even more important, component is your reaction to the outcome of each contest. If everyone is going home with a trophy, it subtly softens the relative anguish of a loss. It is learning to deal with the winning and losing that may be the most valuable lessons learned from athletic competition. Michael Jordan talks all the time about the shots he did not make at the end of games and being cut from his high school basketball team. We (players, coaches and fans) learn from both winning and losing, but the most profound messages accompany our reaction to the games we do not win.

It is easy to process winning. The self-examination of performance is not nearly as thorough and severe as it would be following a less desirable outcome. This applies to everyone associated with the competition, parents and fans alike. Every game we play — from lunchtime hoops and HORSE in the backyard and pickup six-a-side soccer to summer league lacrosse games and Wiffle ball in the driveway — provides us with opportunities to learn how to deal with results.

Participation in the athletic arena is not a zero-sum activity, although it often can feel thus. Peter Lasagna recently reminded me how often I would talk about how the feeling after a one-goal game was so disproportionate to how the game may have actually unfolded. In the 2004 national championship game, Syracuse did win, but no one who witnessed the contest would deny that the Navy Midshipmen were winners that day. The results are certainly an obvious factor, but it is the relationships, the effort, the execution and the reaction that should carry and define the day.

I have often said that there is no “deserve” in sports. At times the outcomes of these games seem so unfair and arbitrary.  While championships, jobs, bonuses and roster spots are often determined by these outcomes, it is beside the point when considering the essence of competition.

There is an old saying: “Life is 10 percent what happens to you and 90 percent how you respond to it.” We keep score because learning to win with grace and lose with dignity affects every part of our lives. We need to experience both of those outcomes unexceptionally to develop a balanced and reflective personality.

As parents, coaches, fans, participants and, most importantly, as mentors to those over whom we have influence, one of our most profound responsibilities is teaching the value of both circumstances.

Play, enjoy, compete and process the results for their prudent value.