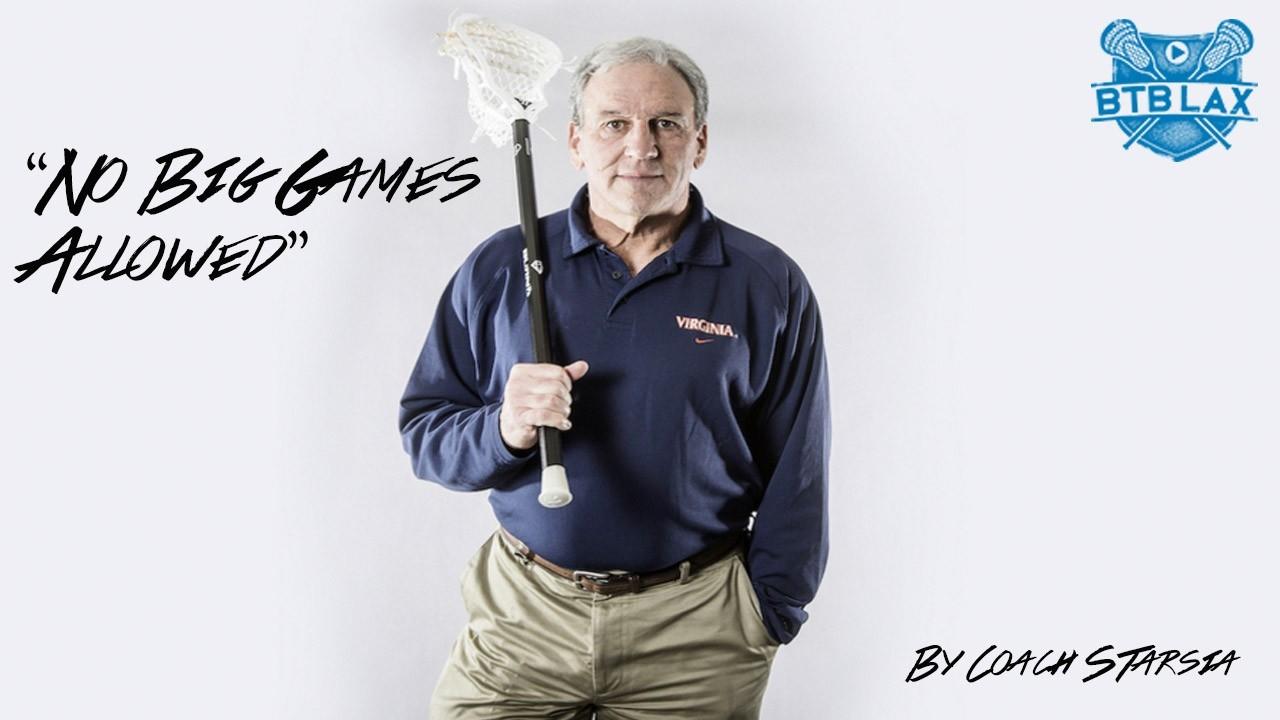 (Coach Starsia is a contributor writer for BTB LAX.)

One of the coaching questions I am asked most frequently is establishing the ability to achieve and maintain a consistent level of performance.  We would all like our teams to play their best every game and are desperate to avoid those sub-par performances.

One of the great joys of our sport at the college level is that most of the best teams play each other during the regular season.  It is a feast for fans but is a challenge for coaches and players.  During most of my time at Virginia, we had a stretch of consecutive weekends that began with Syracuse at the end of February and proceeded through Cornell, Notre Dame, Hopkins, Maryland, North Carolina, Duke and the ACC Tournament in succession.  How do you go through a run of games of this caliber and maintain the emotional and physical edge required to succeed?

It was early in my career when I first became aware of John Gagliardi, the head football coach at St John’s University in central Minnesota.  The winningest college football coach in history (489 wins) built a program and a career on an unlikely philosophy called “Winning with No’s”.  In his system, there was no calisthenics, no sprints, no tackling dummies, no whistles, no live tackling (ever) and…no big games.  It is certainly hard to imagine most of the football coaches in my lifetime agreeing to abide by such a radical ideology.  At the same time, we are all such copy cats and football coaches are simply choosing to ignore the most successful formula.

I did not read anything more about the concept of “no big games” but just that simple expression seemed a revelation.  As coaches, we are always talking with our charges about getting ready for a big game.  We want to play our best, Cornell is a “big game” but, what happens when the game ends and we have Notre Dame coming up?  That is a big game too, is it bigger than Cornell?  Players want truth, they want to be spoken to plainly and honestly.  I think any coach would struggle making a convincing argument that you had big game after big game coming up one after the other throughout a long season.  In addition, how do you make the argument for a midweek game between Hopkins and Maryland?

The concept of no big games became a liberating philosophy that addressed more than just game day emotional preparation.  If there were no big games allowed, it was not complicated to elevate that idea to the next level and suggest that no day was more important than any other.  By saying that “we want to have a good practice today”, are you suggesting that you won’t require that tomorrow?  I realize that would not be anyone’s intention but, again, what are your players hearing?  “No big games, no big days” means that every game and every day is the most important.  We want to achieve and maintain a level of daily performance that will help us reach our final goals.  I aspire to have a team that gets after it every day and expects of themselves to play their best no matter the name on the opponent’s jersey.

At the same time, I completely understand and accept that walking in to the Dome produced a different level of anticipation and excitement.  However, we would never allow any talk of a “big game” throughout the week, either among ourselves or with the press.  The players knew what was going on, it helped us focus on the daily effort.  I do remember distinctly, being asked the morning of the National Championship game in 2003 by assistant coach David Curry…”how about today, Coach, big game today?”  “Nope, David”, with a smile… “No Big Games Allowed”.