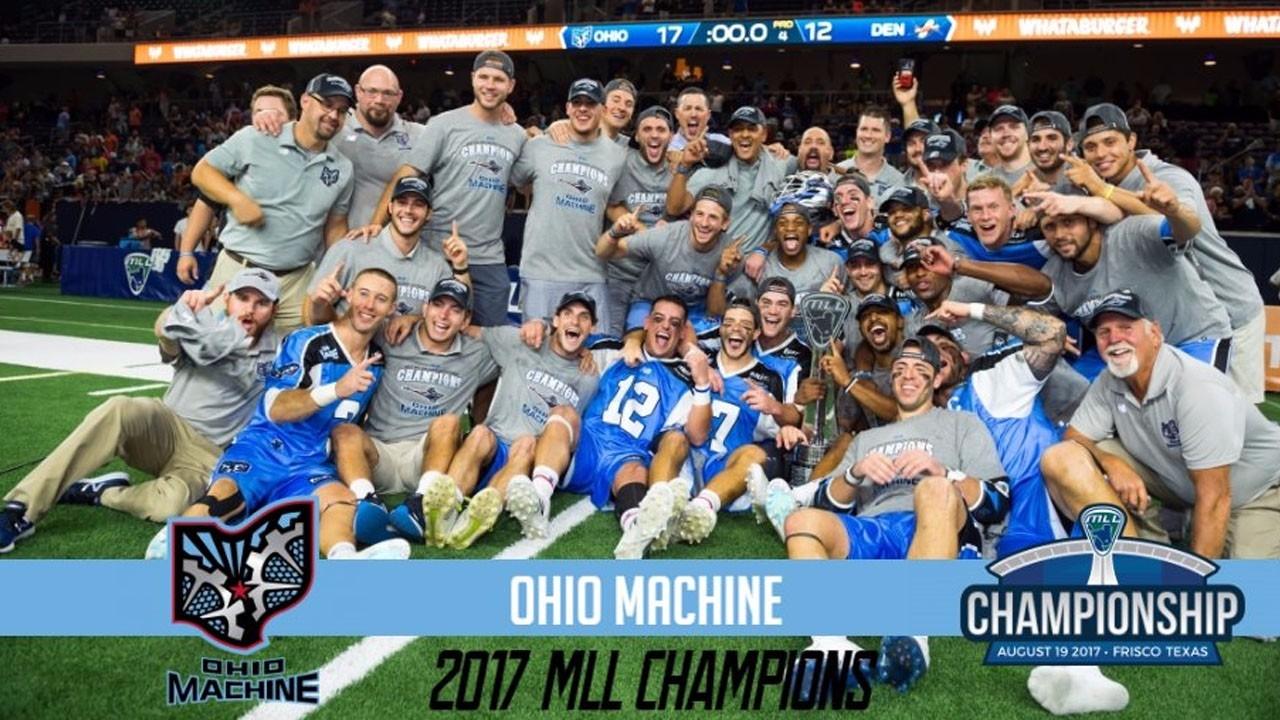 Needless to say, weather wasn’t a factor.  Game attendance was a little over 7,000.

It took a while to watch this game.  Lots more commercials and in-game interviews cuz CBS Sports televised it…

It was a rematch from last year, and Ohio was looking for its first title having made the playoffs the last four years.

They played twice earlier this season, and in their last meeting Greg Puskuldjian only won 18% of his face-offs.  That’s not good.

Different story this game as he won 15 of 32… a much higher percentage.

It was a game of runs, and I thought Denver was gonna take it, but some missed opportunities allowed Ohio to gain some momentum.

Pat Haberson, Ohio’s defensive midfielder, scored an early goal. Denver let him walk right in and score.  I never noticed him before… After a little research, I saw he played college ball at Virginia and went to Dematha for high school.  (Side Note:  Dematha is in the same league at Gonzaga… where I coach.  It’s the Washington Catholic Athletic Conference (WCAC), and the sports across the board are off the charts. Markelle Fultz played hoop at Dematha just over a year ago… I saw him play multiple times.  Fultz was just the #1 draft pick in the NBA draft.)

Eric Law tears it up for Denver.  His shooting percentage this year was 47%.  That’s insane.

BJ O’Hara is the head coach at Denver.  He used to coach at Hobart back in the 90’s and won three Division III championships there.  He coached there after Dave Urick won 10 consecutive championships at Hobart... (I coached with Urick at Georgetown for six seasons.)

John Grant Jr is Denver’s offensive coordinator.  He was one of the top players in the MLL until he had to step away due to head trauma. I know that guys like Law and Matt Kavanagh love having Grant Jr. as their offensive coach.

One thing that I’m curious about is how the coaches and players interact during the week as they're all scattered across the country. They must Skype during the week to go over game film and talk strategy.  MLL teams only get to practice once a week, and that’s usually the night before the Saturday game.  They probably have a Saturday meeting as well… I’ll dig into this a bit and write something up about it later during the off-season...

The game was tight in the first half with Ohio taking an early lead.  But Denver had the lead at halftime, 7-6.

Denver pretty much controlled the 3rd Quarter, and carried the lead to the 4th.

Denver was up 10-6, when Kavanagh found Wes Berg on the doorstep to make it 11-6.  A five goal deficit is substantial.  Three not so much… four and it’s getting hairy… but you don’t want to be down five (then again I think the Boston Cannons were down 10 to the Florida Launch earlier this year and tied it up.)

Ohio saw some light, and they took advantage.  Baum caught fire, and before long it was 10-9.  Down by a goal...

But, Kavanagh was on fire all day, and he scored to put Denver up 11-9.

An argument can be made that Kavanagh was the best player on field in this game.  He found Berg multiple times by threading passes.  He scored 4 goals, but actually had several more looks in the 4th Quarter that just missed.  Those go in and who knows how this game pans out.  But they didn’t....

Ohio’s Cannizzaro was also a beast and had 4 goals.  I have some clips that I’ll put on the BTB Lax YouTube Channel.   He’s so aggressive and fast when dodging behind the cage

Kavanagh and Cannizzaro traded ridiculous goals and the score was 12-10 Denver.

Bernhardt scored to make it 12-11 Denver.  Then Puskuldjian wins the draw and takes it to the rack for a goal… an absolutely huge goal.

All tied up…  with just over 7 minutes remaining in the 4th Quarter the score was tied at 12.

Then Holman went on a tear and unleashed some cannons… he ended up being the game MVP.

This game got me thinking about how important momentum is in sports.  I thought to how Kavanagh could’ve scored 6 or 7 goals - he ended up with 4.  That could’ve changed things…

On the flip side, Cockerton could’ve scored 5 - he ended up with 1.

So maybe those two factors off-set each other...

Major League Lacrosse is a fun league to follow.  I watched more games this year than ever before.

MLL players need to handle all their own personal training.  To stay at that high level, they need to find time to run, lift, and work on their skills… all of this while balancing the demands of their respective jobs.

I actually teamed up with some MLL guys to make a training program for YOU to follow.  Pretty much exactly what they do… all you gotta do it follow it...