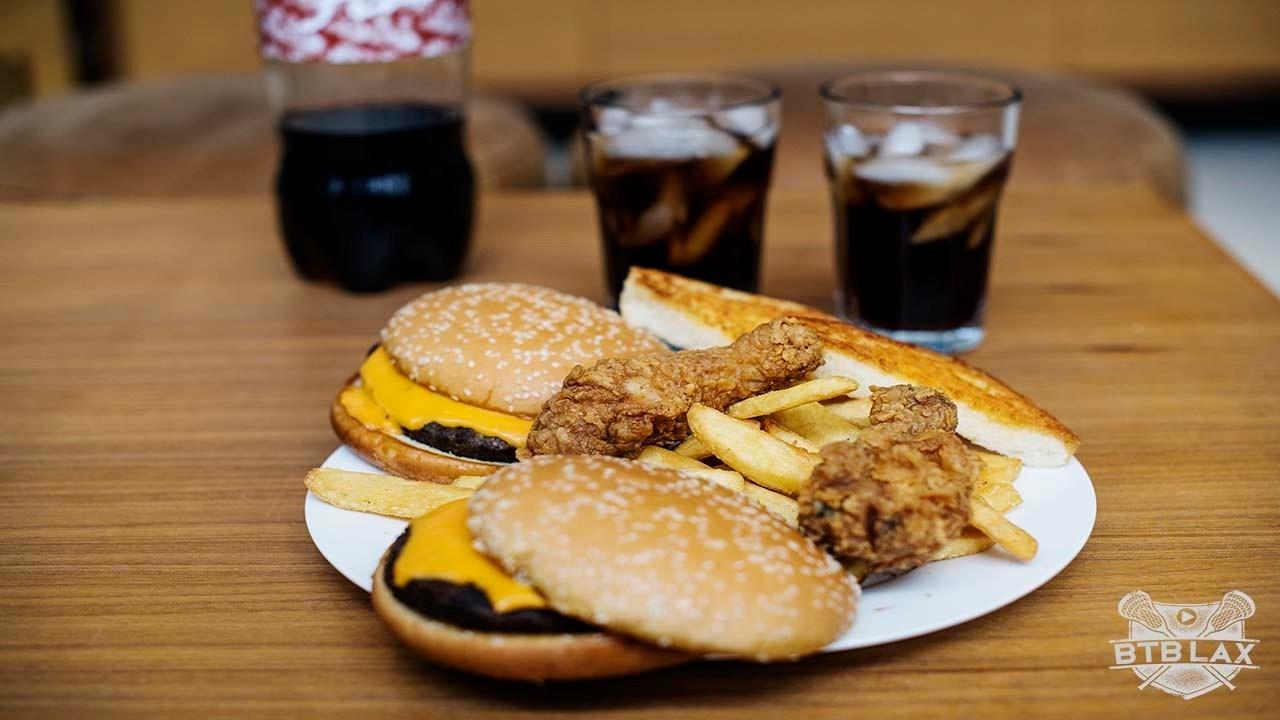 My diet was very poor when I played college lacrosse.

I didn't know how to eat.

At Tufts, my typical dining hall meal would look like this:

I’d make a salad and load it with croutons and creamy dressing.

Probably snag a slice of pizza...

I'd crush what was on the hot grill (meat, mac & chz, and fries maybe.)

And then I'd eat cereal for dessert.

At one point, I regularly ordered chicken caesar salads for a night snack.

I thought they were healthy... wrong!

Looking back, most of that food is horrible…

Croutons and ranch dressing are bad.

Cereal is bad… full of sugar.

I kept a similar diet throughout college, and through most of my 20’s for that matter.

At Tufts, I worked out a lot so I was probably in the best shape possible with my diet

We lost to Wesleyan in the NESCAC semi-finals my senior year.

On the bus home, I thought about the end of my college career, and how I was entering uncharted territory.

Poor performance with a run or weight test wouldn’t risk my playing time… those tests were over.

Going forward my workouts would be for myself.

There would be no chaperon.

I was gonna still work out, and I certainly didn’t plan to let myself get out of shape.

That wasn’t an option...

It was more of a psychological thing… but the next afternoon I went to the Tufts gym and rode the stationary bike.

I wanted to set the foundation for this new chapter of my life.

My mentality was (and still is) that I’m not gonna ever stop working out.

In fact, I wanted to take it to the next level.

My workouts were solid all through my twenties.  I trained like I was playing.

I probably weighed 196 lbs… (around my same playing weight played at Tufts.)

I stayed there through my twenties.

But, I was never cut…

My self description would be — "pretty strong, solid cardio, but a little pudgy."

I didn't have abs.

When coaching at Tufts, it was common to go out for lunch.

That could be a big sub, chips, and drink.

Most of the coaches did that, and I thought it was fine.

In fact, I never realized that it could be holding me back.

I always had the false impression that as long as I worked out I could essentially eat whatever I wanted… and as much of it.

But everything changed one Saturday afternoon in 2010 when I talked to Harrison Bernstein at a Georgetown basketball game.

At the time, I was the volunteer lacrosse assistant coach at Georgetown.

Scotty Urick was on the staff, and he was buds with Harrison.

(Scotty Urick was my also my workout partner during that period.  He played in the MLL back then and was also on Team USA.  He’d get after it, and I’d always tag along.  Scotty introduced me to track workouts… I’ll talk about this in another article.)

Harrison is strong and shredded.  (Harrison is the our BTB Lax strength coach and he’s in a bunch of videos inside BTB LX+.)

So the three of us were at the hoops game… Scotty, Harrison, and myself.

I told him I wanted to get more cut.

Without hesitation, he said I needed a better diet.

At first, I was skeptical.

We talked more, and soon he showed me a new world.

We took a field trip to Whole Foods, and he taught me how to shop.

He explained processed foods… what they are… how they dominate the real estate of most grocery stores... and more importantly, how they’re horrible for digestion and health.

He taught me about all the sugar in fruit juices and sodas.

Black coffee was good.  No creamer.

He even taught me about meats… how packaged meat is filled with salt and other junk.

He stressed buying fresh, organic meat is the way.

It was eye opening.

I only ate raw foods (mostly vegetables) for the first 5 days.

I basically ate raw carrots and broccoli.  I could dip it in hummus at least…

After 2 weeks, I was already down 5-8 pounds. I started hovering around 190 lbs.

I learned that eating is a calorie game.

... but some calories are better than others.

It became the new way I ate.

Chips used to be one of my favorite snacks.

Harrison axed those out… come to find out they’re one of the worst things you can eat.

(I eat them as a treat now… certainly not a normal occurrence.)

This “new-way” of eating became my normal for the next several years.

Then in late 2017, I listened to a Terry Crews interview on Tim Ferriss’s podcast.

He talked about intermittent fasting.

Crews ate all his meals in a window from 12 PM to 8 PM or something close to that...

I started the next day.

So I applied Harrison's tips, but just condensed my meals into an 8 hour window.

I did this for year.

It took some time to get acclimated, but then I started narrowing my window even further.

Now I only eat dinner… usually in a 2-hour window.

I’ve worked out on an empty stomach since I started intermittent fasting… (it’s been for the past 3 years or so.)

I have just as much energy.

I’m shocked that this is the case...

I realized that people really don’t need much food.

As a whole, our society over eats.

I still work out all the time.

And for the past 3 years, I’ve gotten much more cut and I can see my abs.

It helps me feel more connected to my body.

I’m around high school lacrosse players all the time with my Gonzaga coaching job.

I see how these kids eat… very similar to the way I used to eat.

Some fundamental adjustments would go a long way to better on-field performance.

The discipline to eat properly will go a LONG way to help you become a better lacrosse player and athlete.

However, they could adopt a rule like no late night food binges.

That food just sits in your stomach overnight.

It’s not good for digestion.

Training hard with a poor diet is the equivalent of buying an expensive car and never changing the oil (unless you have a Tesla!)

You want to give yourself the best chance to succeed.

Incorporating a good diet is a must.