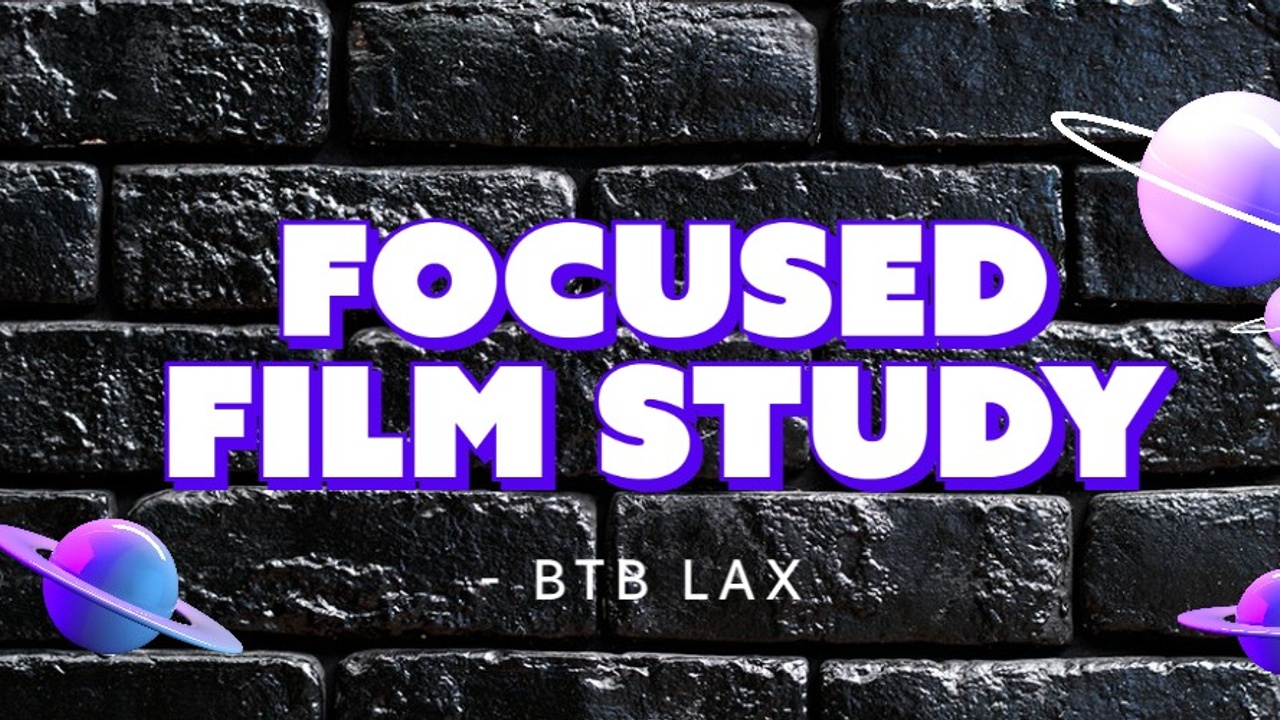 Building your Lacrosse IQ is an important bucket to become a better lacrosse player or coach.

This is accomplished by listening to people who know the game, watching games, attending clinics, reading about lacrosse… stuff like that.

Another way to build your Lacrosse IQ is what I call “Focused Film Study”.

Focused Film Study is its own animal.

(I plan to write a series of articles related to focused film study, and in the process… watch more film myself.)

But first, here’s my background with Focused Film Study.

I graduated from Falmouth High School in 2000.  We never watched any film… I really wasn’t aware of the concept.

(I watched a little football film, but only my freshman year.  I had to stop football due to knee problems…)

I started at Tufts that fall, and vividly remember the first team film session with Coach Daly.

Back then the Tufts film room was a jumbled mess.

It was a shared room with the football team, and there was stuff everywhere!

There were shelves lining every wall with years of Tufts football VHS cassettes.

It went back years...

(Yeah, back then we still watched VHS tapes.)

There were no windows, and once the lights were flipped off, the room went completely dark.

You could only see the projector shining against the wall, and Coach Daly’s shadow.

Daly would always have his red-pointer.

(At the time, Daly also coached football, so he was in that film room a lot.  He had years of experience and it showed...)

During that first team film session I was shocked that there wasn’t any sound.

You would watch film in total silence…

The only sound came from Daly or other coaches.

(It was kinda like watching old-school silent films… not that I ever did that, but was aware of the concept.)

You gotta remember, I only watched games with announcers… so it wasn’t natural watching games in complete silence.

Anyway, it took some time to adjust.

In those first few film sessions, I didn’t play much, so there weren’t many clips where I was involved.

Hence, it was VERY difficult to stay awake.

But you didn’t want to fall asleep because… if caught, you would get booted from the room.

Not a good thing if you wanted to earn playing time.

Daly stressed to learn from others, so I tried that.

Eventually I got more minutes, and would see myself on film.

At first I couldn’t believe it was me...

Over time, I saw the value in Focused Film Study.

The goal is to take stuff from the film room and apply it on the field.

Daly would encourage players to come by the lacrosse office during off-hours to have additional film sessions.

Those were always informative.

After I graduated, I immediately started coaching with Daly as the graduate-assistant coach.

That introduced me to another component of Focused Film Study.

Instead of focusing on my improvement, I shifted gears to evaluations for recruiting and scouting opponents.

At times, I had the red-pointer and would have to explain situations so that players would understand and execute it on the field.

My mindset was ambitious when I started my graduate-assistant position.

I planned to watch film non-stop, and know every opponent like the back of my hand.

But stuff gets pushed back.

There were about 100 recruiting tapes in my office that needed evaluations.

That took hours to get through.

After Tufts, I moved to Washington D.C., and I started coaching at Georgetown as the volunteer assistant.

I went to all the team film sessions, but wasn’t involved in the staff breakdown of film with the other coaches.

(The staff would break film down in the mornings, and I was always at my day job.)

I didn’t watch much film on my own during the six years I coached there.

I should have watched more...

After Georgetown, I started coaching at Gonzaga.

Hudl is a cloud based film platform with lots of cool features.

I can pull up games from 2 years ago and see either raw game footage or specific breakdowns… like goals or turnovers.

Patterns pop up… and the quicker they can be spotted helps you become a more effective player and/or coach.

The bottom line is that the concept of the game hasn’t changed too much.

Same ultimate goal… put the ball in net on offense and keep it out on defense.

Understanding the nuances better than the next guy will give you an edge.

My goal is to have one Focused Film Study session per week.

I’ll write up everything and will try to pull some clips and post them to my BTB Lax YouTube channel.