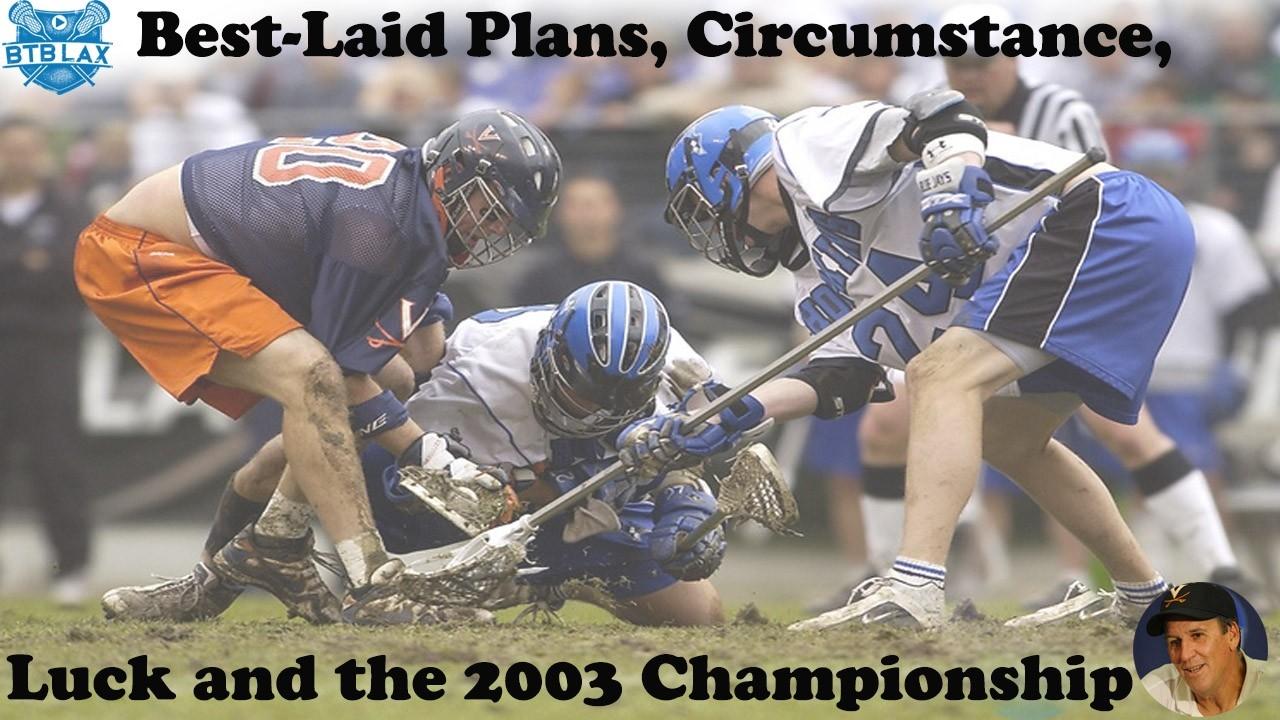 It is hard not to consider the intensity of Dave Pietramala or Bill Tierney, the scholarly, “iPad-using” temperament of John Tillman, or the studied, calming visage of John Danowski, John Desko or Charlie Toomey as a required approach to championship success at the Division I level.  The truth is, however, that things are hardly ever quite as well organized as they might appear or as the coaches might like.  More often than not, circumstances and luck play as big a role as  “best laid plans” in how these frenetic seasons play out.

During this 15th anniversary of Virginia’s 2003 NCAA championship, I would like to take you back to some unexpected developments that led to that championship.

2003 was my 10th season at Virginia, and we had been to five semifinals in the previous nine years.  In every instance, we either did or would have played a team in the finals that we had played during the regular season. We generally had scouting reports and game plans in place and would have spent most of the week leading to the semifinals in preparation for that first game. There are not a lot of secrets among the top teams, and if you were fortunate to win on Saturday, you gathered quickly with your staff to prepare for a sickeningly familiar opponent in the most important game of the year. With one day to prepare, the adjustments were not dramatic.

Hopkins (the No. 1 seed) and Syracuse played in the first semifinal of the weekend.  We had beaten Syracuse, 16-15, in the Dome earlier in the season and had lost 8-7 to Hopkins at Homewood.  We were actually down 6-0 to Hopkins at halftime, hopeful that we might score a goal in the second half, and then Matt Ward had a decent shot to tie it right at the very end.  In the meantime, we played Maryland in the second semifinal of Championship Weekend, and Tillman Johnson stood on his head in our 14-4 win.

What was different for us in 2003 was my daughter Molly’s graduation from college on the Wednesday morning before Championship Weekend. Columbia University is the only college that I am aware of that graduates on a mid-week morning. When Molly and I talked, she understood immediately that it was going to be near-impossible for me to get there. My wife Krissy and son Joe headed to New York City, and I had a quiet house for a couple of days before leaving for Baltimore. By Wednesday’s practice, we had our semifinal game plan in place, and I asked the staff to come back to the office that evening. Marc VanArsdale, David Curry and Hannon Wright were happy to oblige, and I suggested that we go back and re-examine our approach to both Syracuse and Hopkins, should we be fortunate to play through.

My wife, Krissy, and I were able to get to Molly's graduation from the Graduate Divinity School at Vanderbilt in the spring of 2017.

Hopkins had a great regular season, and it was an impressive team. Closer examination revealed a team with a dominating first midfield, that really moved the ball and was uniquely unselfish at the offensive end. They were always looking for the extra pass. We decided that evening to try and use that against them. Given an opportunity to face them again, we would put three poles in the midfield and were determined not to slide, even to our shortstick defenders. We were going to cut off the outlets and make them finish their dodges.  We had never done that during the season, and it is hard to imagine we could have made that adjustment in a short weekend.

Thursday evening of Championship Weekend was a banquet that included all four of the teams.  Each team would have an undergraduate representative speak for a few minutes for their institution, a tradition since abandoned. Our Hatcher Snead, who did not play one minute that weekend, was the final student speaker and gave the most memorable and inspiring presentation of Memorial day priorities. We floated out of that room, and it was the first indication that this might be our time. It also speaks to how important each person’s role on a team. You just never know when you might be asked to step up and make a difference.

Walking in to the stadium for Friday’s shootaround is also a vivid memory. The field looked gorgeous from the tunnel, shimmering and virtually untouched. It did not take long, however, to realize there was a serious problem afoot. The turf was wet and thin and tore up while simply standing to have a catch. I remember saying to the NCAA rep that it was virtually unplayable. It seems the Ravens were going to replace the field with sport turf immediately following the weekend and did not put much in to its preparation. There was not much we could do at this point, and the field deteriorated throughout the weekend. By Monday’s final, you were standing in water over your shoes.  I did not know whether it would have a greater  effect on the offense or the defense.

The key matchup for us going in to a possible final game with Hopkins was going to be a short stick on attackman Peter LeSeur. He was an excellent player, but our sense was that he dodged to pass and that we were going to take our chances with him shooting on Tillman. I stood on the opposite sideline during the first half of the Syracuse-Hopkins semifinal and was at the Hopkins offensive end of the field during the final seconds. LeSeur was dodging a Syracuse defenseman, and I found myself talking to John Desko under my breath, “Don’t John; don’t, don’t slide to him,” as if John was actually playing. Syracuse slid to LeSeur, he fed the crease and Hopkins scored just before the half.  I knew what we were going to do, if we had the chance!

Hopkins went on to beat Syracuse and our convincing win over Maryland set the stage for the final. We followed through with the decisions we had made earlier in the week, put poles (Trey Whitty, David Burman and Ned Bowen) on midfielders Donegar, Harrison and Boland, left Brett Hughes on attackman Kyle Barrie and put shortsticks on Bobby Benson (Nathan Kenny) and the key matchup of the game — Billy Glading on Peter LeSeur.  We did not expect much pressure from Bobby off the dodge but held our breath early when it got to Peter.

We never practiced this set up before the game and with poles up the field and shortsticks catching up to the play; we went offsides three times in the first quarter. We settled down, got the lead early behind Chris Rotelli’s play and AJ Shannon’s four goals. Billy managed the match-up on LeSeur and although Tillman wasn’t asked to do as much on this day, he owned the weekend overall.

I have always been smart enough to have great assistant coaches, been fortunate to have worked with talented, creative players and blessed to have had a family that understood and loved what I did for a living.  In every instance, it took a group effort to manage success and, in this instance, alongside the obvious contributions of Marc Van, Billy, Chris, AJ, Trey, Tillman, etc. stood Hatcher and….Molly.