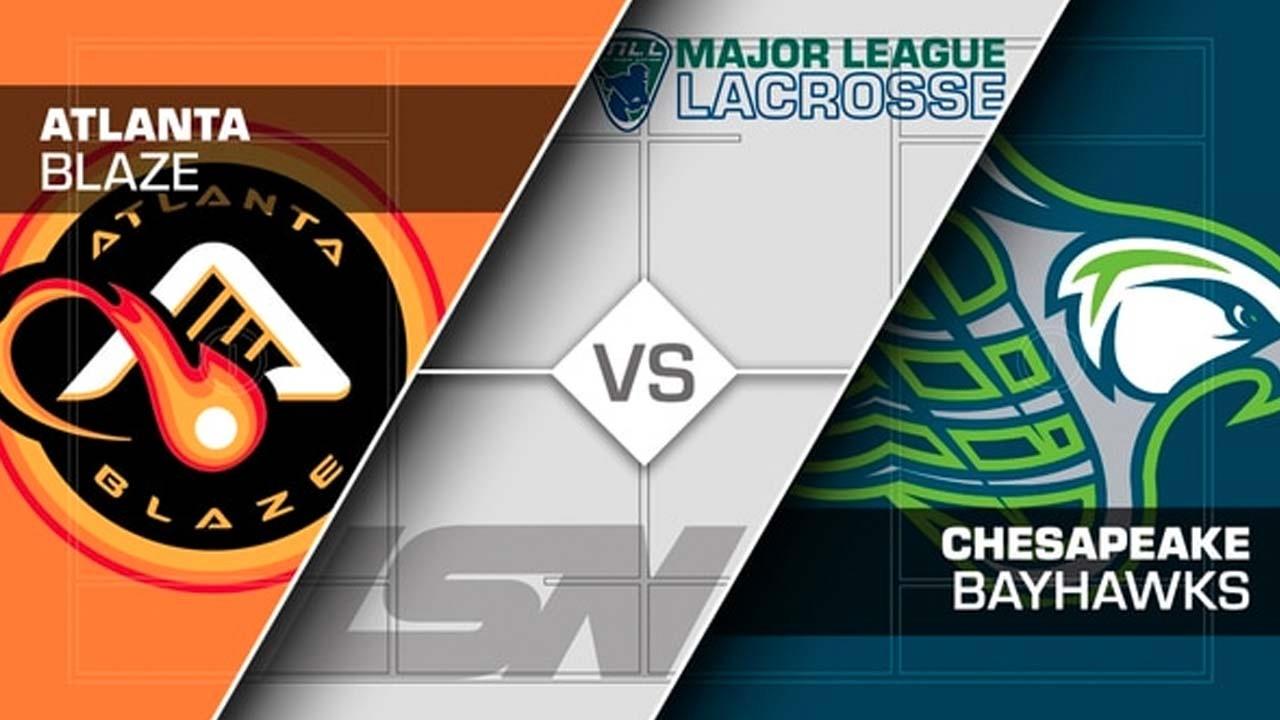 Two weeks into my Major League Lacrosse binge, and I’m liking the “re-discovery” of old names…

The games themselves - lots of goals - but it’s even cooler to see how all these former college stars mesh with one another.

Lacrosse is still a small sport.

It’s not nearly as big as football, basketball and baseball…

So I recognize lots of names.

So this post focuses more on the players than the actual game.

I wanted to see the Chesapeake Bayhawks play, and guess who they were matched up against…

Entering the game, both teams stood at 5-6…  battling for the last playoff spot.

(Only 4 teams make the MLL playoffs.)

David Huntley is the head coach of Atlanta.  During the spring, he’s the offensive coordinator at Calvert Hall in Maryland.

Calvert Hall is in the MIAA (Maryland Interscholastic Athletic Association)… probably the best high school lacrosse league in the country.

In most high school polls, Calvert Hall finished in the top 10 last spring.

We scrimmage Calvert Hall from time to time - they always have a solid offense.

I mentioned Scott Ratliff last week, but he never comes off the field.

I don’t understand why he plays so much offense though.  Most of the time, he just acts as a feeder and moves the ball as the point guy posted up near the restraining line.

Why not put a fresh middie out there, who can dodge and test the defense?

He hardly ever dodges.  Plus it’s not like he’s burying 2-point shots all the time...

I just don’t get it.

I like him as a player.  Just don’t agree with him playing so much offense.  Ratliff played at Loyola - won a championship there in 2012.

He was a college All-American…  and scored 30 goals over his career as a long-pole.

I get that he has a bunch of points - 20 at the time of this post - but who’s to say that another talented offensive guy wouldn’t have more production with that kind of playing time?

Chesapeake has lots of other big time players.

Starting with Lyle Thompson.  He won back-to-back Tewaaraton Awards in 2014 and 2015.

I love how he tests his defenseman every single time.  And he can get his shot off so quickly. If you’re the defenseman guarding him, you just gotta know that he’s never gonna let you off the hook.  The guy is relentless...

Next up, Myles Jones - another Duke guy.  He won two championships there.  He’s becoming one of the biggest stars in the MLL.  At times, though, he holds the ball too long.  Opposing teams know that and quickly double team him, and he has a tendency to turn the ball over.

Josh Byrnes.  This kid just graduated from Hofstra (after transferring there from nearby Nassau Community College).  He scores in ridiculous ways... if you get Lax Sports Network, you gotta check out his goals.  In his MLL debut against Rocherster he had 7 goals!

C.J. Costabielle.  He also played at Duke and was a 4x All-American.  Won a championship. Remember, he scored the winning goal over Notre Dame in overtime back in 2010.  This guy is still playing at an extremely high level.

Will Koshansky - another defenseman for Chesapeake.  I really like this kid.  He hails from the University of Pennsylvania where he started all four years.  He was All-Ivy, but never an All-American.  I bet if he played for Maryland, he would’ve been an All-American for sure.

He marked Kevin Rice the entire game.  Rice is Atlanta’s top scorer.  It was a great battle.  I’d probably give the edge to Rice, but Koshansky is a top defender in my mind.  It’s not an accident that he’s guarding the opposing team’s top scorer...

Colin Heacock got picked up by Chesapeake.  Remember, he just graduated from Maryland... Won a championship.  I wrote about him back in the spring here.

Brian Farrell is back on the Bayhawks.  Farrell is the head coach at Boys’ Latin in Baltimore.

He’s a great coach (took over for the legendary coach Bob Shriver a couple years ago) and is keeping that team at their “normal” elite level.  He coaches against Huntley at Calvert Hall.

Farrell played at defense at Maryland and coached there for a bit as well.  He really knows his stuff…

In fact, I just got him on out on the field to share some of his secrets about lacrosse defense.

The product is called… The Defensive Footwork Formula:  The Blueprint to Playing Shutdown Lacrosse Defense.

Stayed tuned for all that… it’ll be coming your way in August.  Just putting all the finishing touches on it now.

Farrell had a nice goal in this game.  It was actually a pole-to-pole goal… meaning he got the feed from a fellow long stick.

Jesse Bernhardt is another defenseman for the Bayhawks.

His youngest brother, Jared Bernhardt, just finished his freshman year at Maryland.  Look for Jared to be one of the best players in college lacrosse next year.

Jesse coached at Princeton last year, but will be coaching at Maryland this fall.  He played at Maryland as well and graduated in 2013.  Oh yeah, he was a 2x All-American there.

Anyway, the game was tight the whole time.  Atlanta took the lead deep in the 4th, but Chesapeake tied it up.

There was a questionable penalty on Atlanta with 1 minute left.

That put Chesapeake man-up.  They scored almost immediately and secured the victory 13-12.

Watching man-up in the MLL is fun.  They score almost instantaneously.

The stick work and ball movement is just so good.  Not to mention the shooting…

It’s achievable on your end… just gotta start putting in the work.